We demonstrated that, after having accumulated a 'jackpot' set of driver alterations, many colorectal cancers grow as a single "Big Bang" expansion, populated by numerous intermixed subclones that are not subject to stringent selection (Sottoriva et al. 2015, Nature Genetics). This produces subclonal variegation, where some distant regions of the tumour are more related than nearby regions. We showed that this mixing behaviour is a sign of malignant potential that developed early during the growth of the cancer. Additional evidence of lack of selection in established colorectal cancers has been presented in subsequent collaborative work (Sun et al. 2017, Nature Genetics; Cross et al. 2018, Nature Ecology and Evolution). 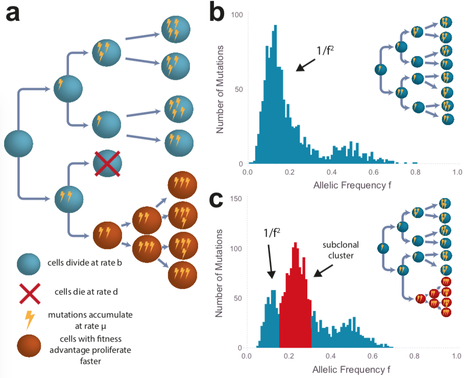 2) Measuring neutral evolution and positive selection from patient genomic data
​
Inspired by the Big Bang study, we used genetic data of more than 900 tumours from 14 different types to understand the patterns of tumour expansion in large cohorts. We found that many cancer mutational patterns, despite appearing complex, could be explained by a simple mathematical model of neutral tumour evolution (Williams, Werner et al. 2016, Nature Genetics). This finding suggests that the apparent chaos of cancer genomes could be simplified and understood more effectively using mathematical modelling. In a follow-up study, we then quantified also non-neutral evolutionary dynamics in those cancers where subclonal selection was detectable (Williams et al. 2018, Nature Genetics). We used a combination of computational modelling and theoretical population genetics, applied to patient high-depth tumour DNA sequencing to simultaneously determined the detectable subclonal architecture of a tumour, and measure the selection coefficient, time of occurrence, and mutation rates of selected subclones. These evolutionary parameters can be used to stratify patients based on how their tumour evolves, and also to play models forward to forecast the future evolutionary trajectory of a human malignancy.​﻿