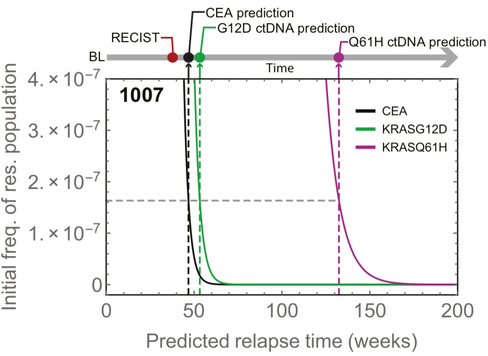 ​Treatment resistance is the main problem in cancer therapy today. Early prediction of patient relapse would be extremely valuable to determine if a treatment is failing and to intervene early, before the tumour comes back as large and heterogeneous as it was at the start. The use of so-called 'liquid biopsies' to look for traces of circulating tumour DNA (ctDNA) in the plasma of cancer patients, holds immense promise. However, due to inter-patient variability, simple cohort-level measurements of presence/absence or quantity of ctDNA are unlikely to be reliable predictors. We combined frequent ctDNA profiling over time (every 4 weeks) of colorectal cancer patients undergoing EGFR targeted treatment within a phase II trial, with mathematical modelling of treatment resistance (Khan, Cunningham, Werner et al. 2018, Cancer Discovery). This allowed quantitative forecasting of the waiting time to progression in a significant proportion of patients. These results show that it is possible to make quantitative patient-specific predictions of when the tumour will relapse, thus creating a 'window of opportunity' for early intervention.

The limitations of many current studies on ctDNA, including our one above, is that in order to track clonal evolution during treatment using the plasma of cancer patients, some level of prior knowledge of what mutations to look for is required. For instance, in Khan et al. 2018 we knew we had to look for RAS/RAF pathway mutations, as those are known to be involved in anti-EGFR treatment. In another study in breast cancer, we realised that we could use epimutations (epigenetic changes in the genome) that behave like 'molecular clocks' to track cancer clones in ctDNA without prior knowledge of what to look for (Cresswell et al. 2020, Nature Communications). Results were exciting although more work is now needed to confirm the utility of epigenetic clocks to monitor cancer evolution during therapy.